Lindsey Stirling and Mark Ballas Jive Their Way to the Top!

Dancing with the Stars week three brought on the celebrities guilty pleasures!  After admitting to a rough week, Lindsey declared her guilty pleasure to be staying in her pajamas all day!  Dancing to Wake Me Up Before You Go Go by Wham!, the couple performed a pajama clad jive which head judge Len Goodman called "the dance of the season".  The team were awarded 27 points, which put them at the top of the leaderboard at the end of night!

The second night of competition for week two found the remaining Dancing With the Stars contestants dancing a Latin style.  Lindsey Stirling and Mark Ballas danced the Salsa to “Mani​ ​Picao​ ​(Salsaton Remix)”  by Ricky​ ​Campanell.  The judges raved about the performance, praising the choreography and Lindsey's dancing.  They were given a score of 24, which tied them for second place with Jordan Fisher and Lindsay Arnold.

Debbie Gibson and Alan Bersten were eliminated at the end of the night, so Team Shark moves on to week three of the competition!

Week two of Dancing With the Stars had Lindsey Stirling and Mark Ballas dancing a quickstep to Swing Step by Jurassic 5.  The dance had a story of starting as caterpillars and turning into beautiful butterflies.  The beautifully creative dance was praised by the judges, and earned a score of 21.

They were called safe at the end of the show and will dance salsa during night two of the week two competition.  Barbara Corcoran and Keo Moetspe were the first couple eliminated.

The premiere of season 25 Dancing With the Stars was Monday, September 18.  Lindsey Stirling and Mark Ballas danced a cha cha to Don't Worry by Madcon featuring Ray Dalton.  They were the last to dance and wowed head judge Len Goodman, who said they were the best dance of the night!  They earned a score of 22, which tied them for 1st place with Jordan Fisher and Lindsay Arnold.

Next week will be a new dance on both Monday and Tuesday, along with the first eliminations of the season. 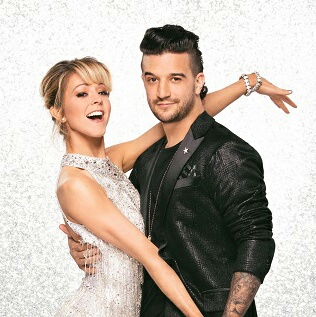 Looking forward to watching Mark Ballas and Lindsey Stirling dance on Dancing With the Stars?  If so, remember they will not get to keep dancing without the help of the fans.  Not familiar with the show?  Here is some basic information about how the show works and how you can keep Team Stark dancing!

The couples dance on Monday nights for a score from the judges.  Then the fans vote for their favorite.  The judges’ score counts 50% and the fans 50%.  The key to the judges’ score is that they convert it to a percentage.  They take all the scores from the judges and add them together.  Then that number is divided into the score for the individual couple. That gives the 50% that counts as the judges’ scores.  Same thing with the fan vote.  All the votes are totaled and that number is divided into the couples fan vote.  The lowest combined judges scores and fan scores send a couple home.

The first is by phone.  The voting number for Team Stark is 1-800-868-3407. The number will remain the same throughout the competition.  Phone lines open as soon as the show starts and stay open for one hour after the show ends for each time zone.  You can only phone vote during this time frame for your time zone.  For example:  New York residents would phone vote from 8PM-11PM EST.  California residents can not phone vote until the show is on in their time zone.  Fans should be encouraged to phone vote as soon as the show starts.  After they dance and at end of the show are the hardest times to get through and we want every single vote.  You can vote on as many phones as you have access to.

The final way is online. In order to vote online, you must have an account.  Fans go to http://abc.go.com/shows/dancing-with-the-stars/.   At the top of the page in small print is a place that says Join.  Click on this and it will walk you through the process of making an account.  Fans should make their accounts before the show starts because when the show is going the site crawls. There is no limit to how many online accounts you may have, but each must be attached to a valid email.  Voting times for online voting are 8PM EST on Monday to 8PM EST on Tuesday.

You now have an account valid for voting.  On voting night you will click on the voting tab and enter your email address for the account and password and will be allowed to vote.

If you vote multiple accounts you will probably have to clear cookies or your cache after approximately 15 accounts in order to continue voting.

So that’s how you do it!  Season 25 is going to be a very competitive season!  Please keep Team Stark dancing by sending votes their way!

Meet Lindsey and Mark-Dancing With the Stars

Get to know a little about Team Stark-Lindsey Stirling and Mark Ballas!